A day spent at South Gare, Redcar produced a mix of regular visitors & some interesting new faces.  The strong June sunshine posed difficult conditions for photography as the day progressed. 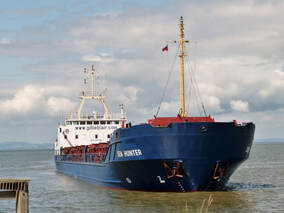 ​Seen making her approach and passing into the outer dock with a delivery of French wheat for the mill.

The 3,100ton DWT general cargo vessel was built in 1990 as the 'SIRRAH', the original name is still visible on plates at the bow.
​
​She is owned by 'Gillie & Blair' and operated under charter to 'Torbulk', both are UK companies. 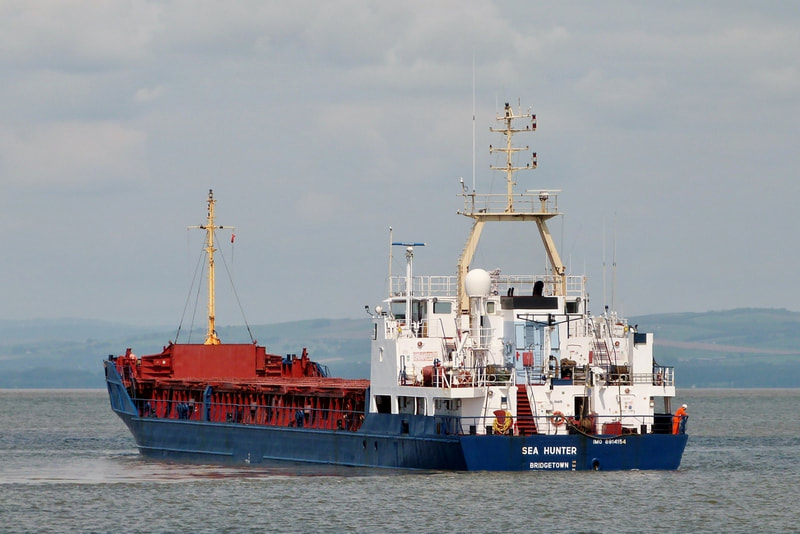 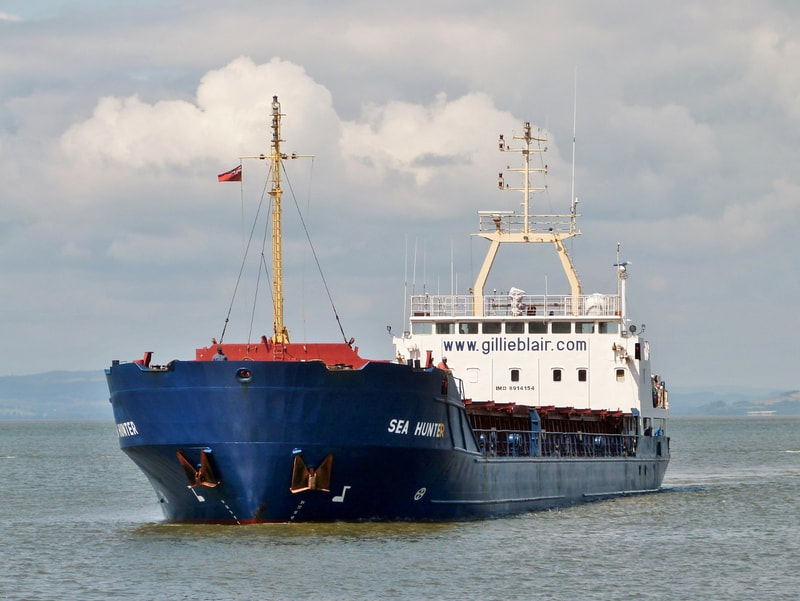 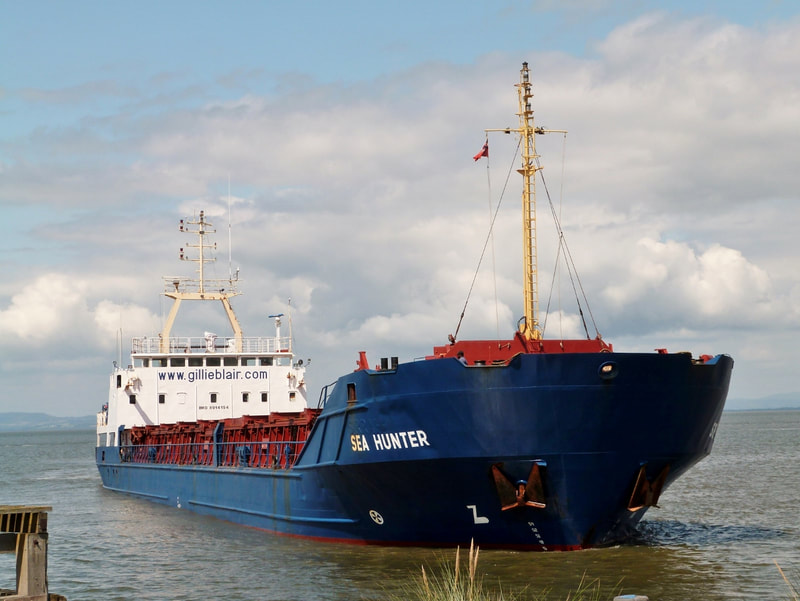 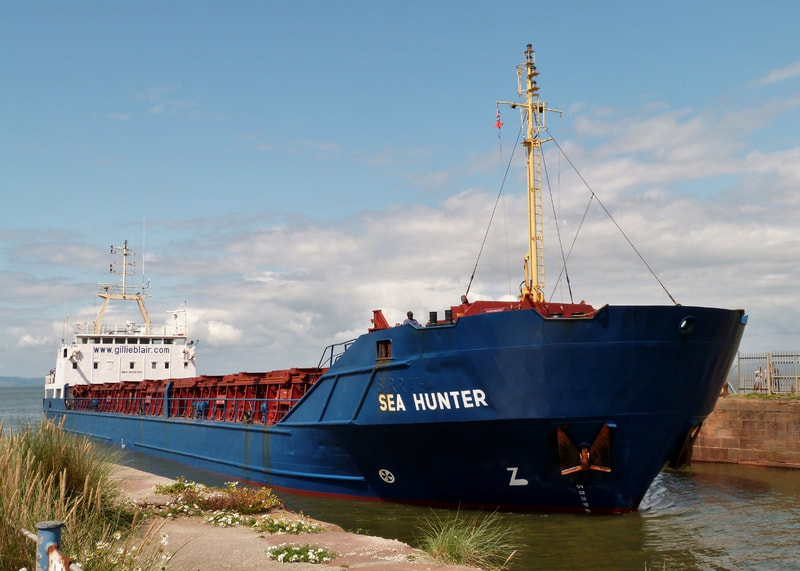 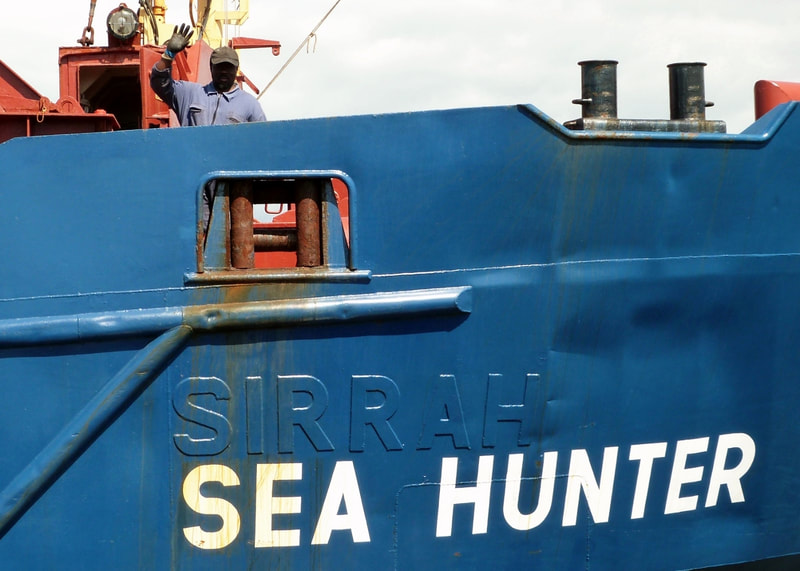 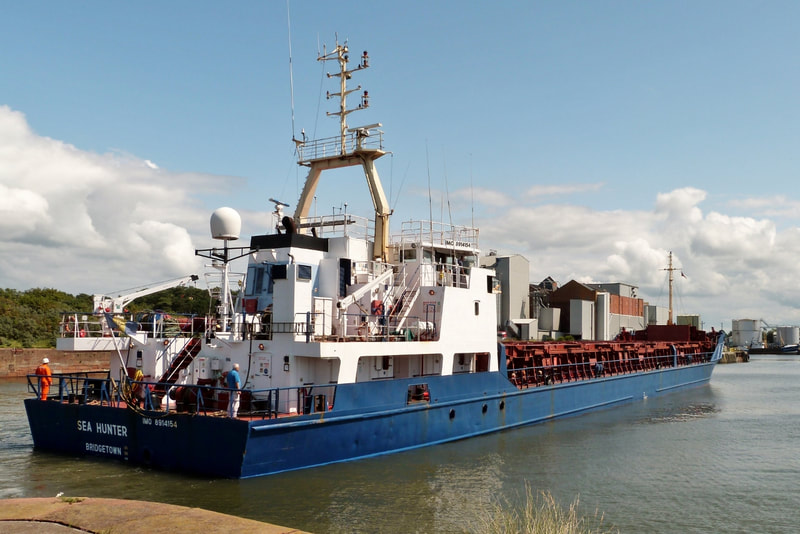 Seen making her way to Silloth after picking up the pilot.  Photo credit Phil Christopher.

The 3,600ton DWT vessel is on time charter to 'Wilson'.  Registered in Malta, she was built in 2010 with the same name.
​A first time at Silloth with fertiliser from Lithuania.

The molasses tanker made her third visit of the year with a cargo from Avonmouth.  No new photos from Silloth on this occasion (photo right taken 30th Apr 2018) but an interesting shot of her being loaded by transshipment at Avonmouth Dock, courtesy of Arthur Terry.
​
Bulk tanker ATLANTAS II, with a DWT of 37,700ton is seen transferring 3,000ton of molasses from West Palm Beach, Florida.
The sugar cane by-product is one of the largest bulk exports handled by the US port.

At this time of year our thoughts are with the seamen who work on the ships visiting our Cumbrian ports.  It's a tough job working for long periods away from home.  It's a pleasure to see some of these characters keen to get into the frame when photographing passing ships.  Some are well-practised, and once they spot the camera adopt a pose!  A few examples are presented below.  Some of the vessels featured will be at sea over Christmas. 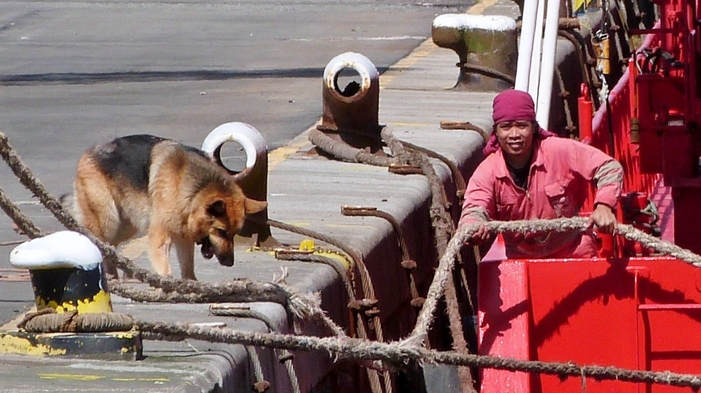 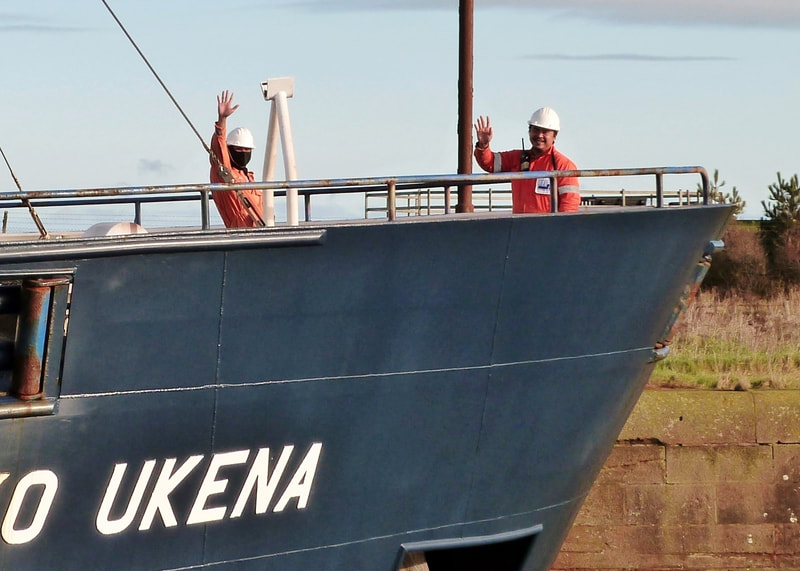 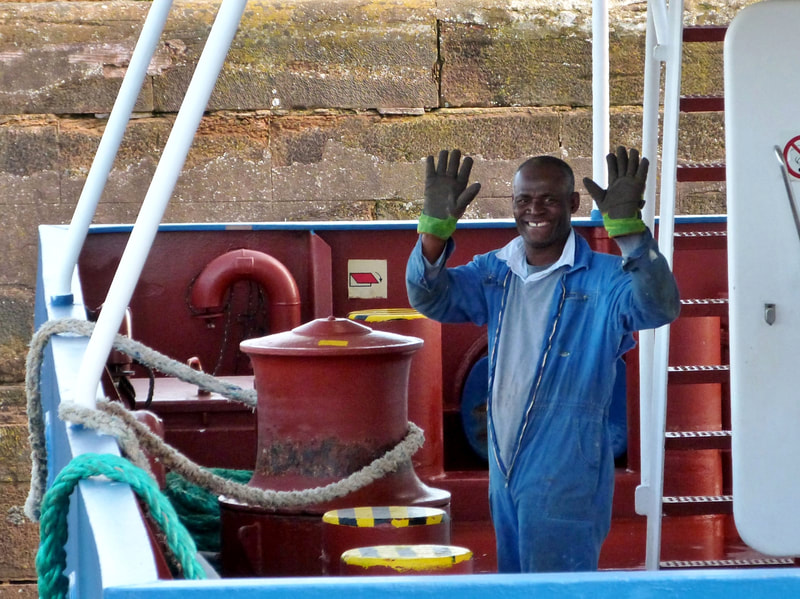 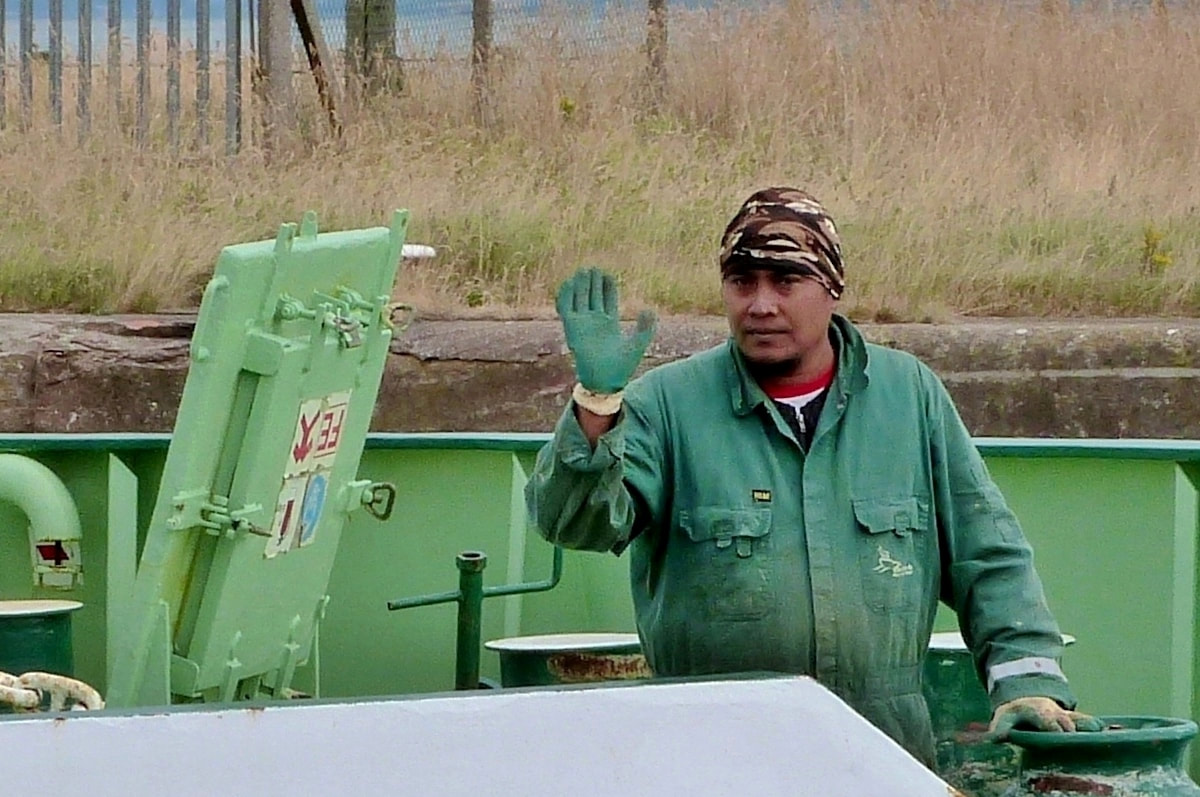 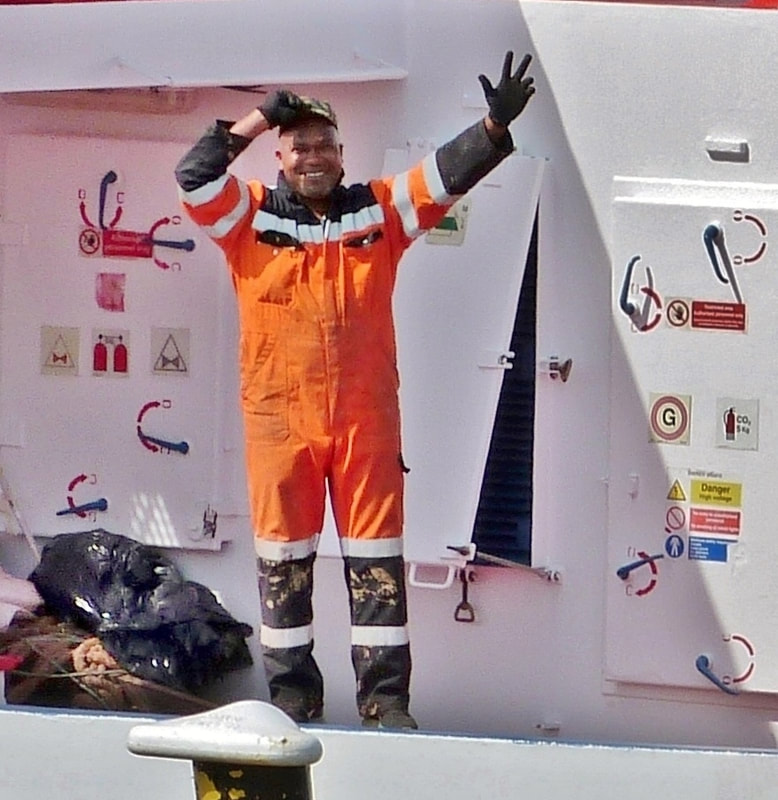 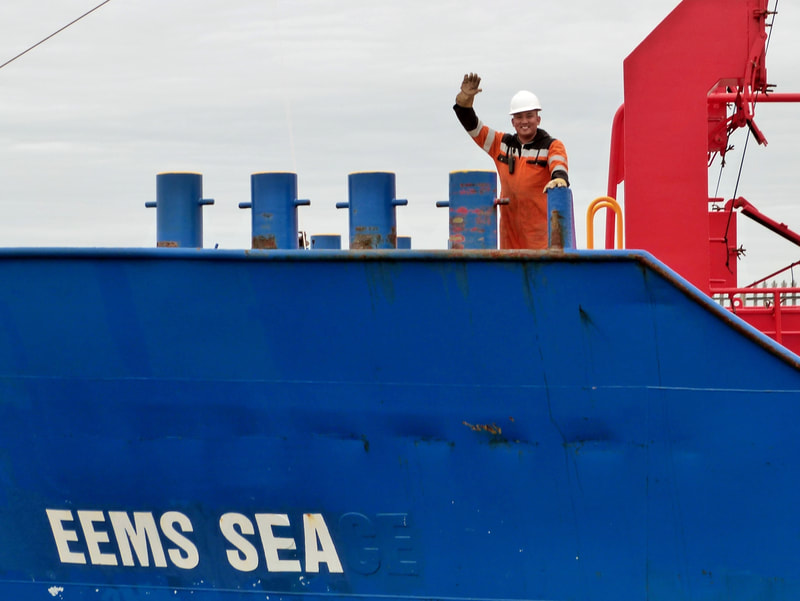 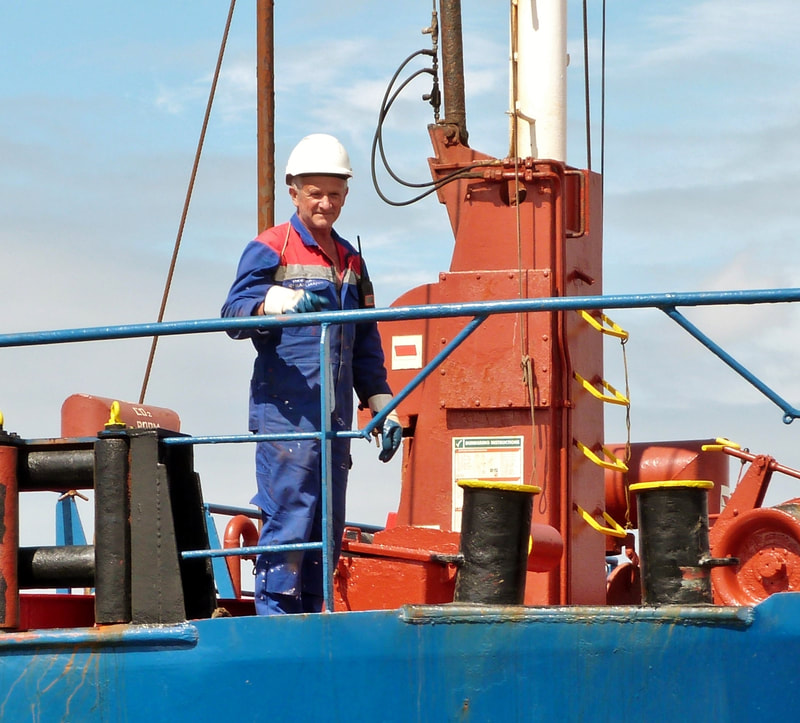 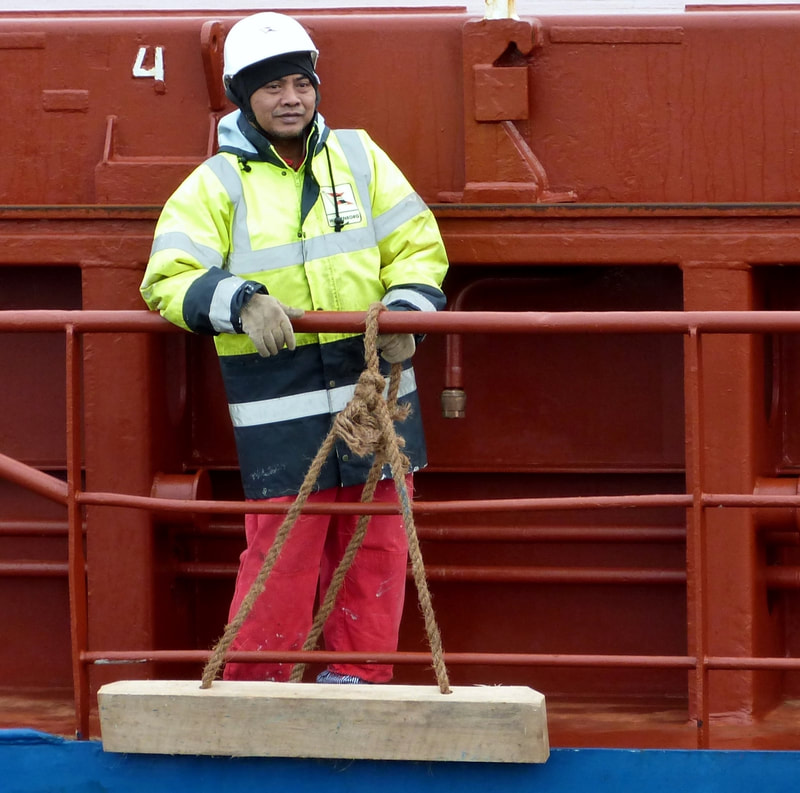 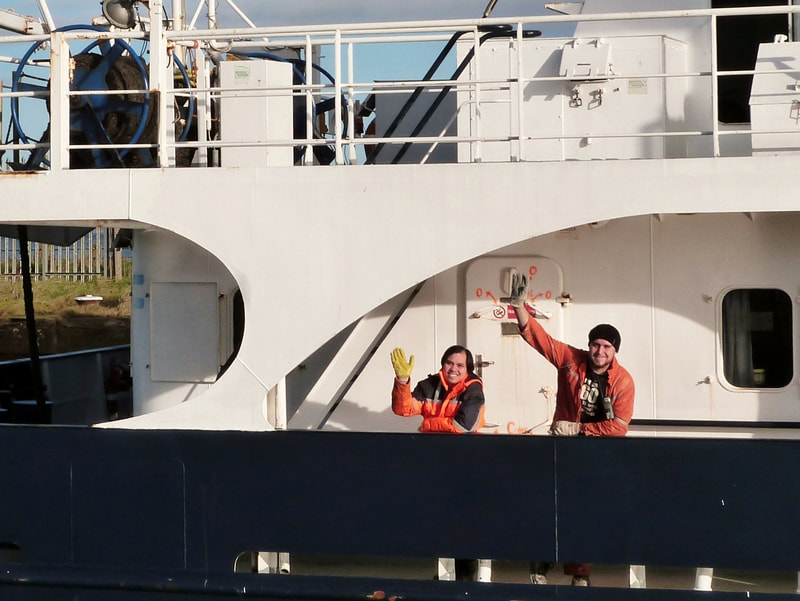 Inbound from Lisbon on a grey drizzly morning.

Deliveries of powdered cement by Arklow boats have become a regular monthly event.
This was the first visit of the Irish registered ROGUE to Workington.
​Calm conditions made for a straightforward approach & entry to the dock. 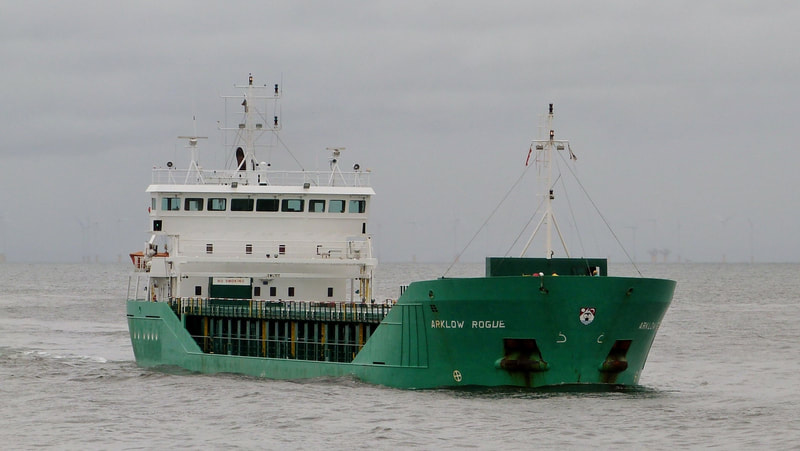 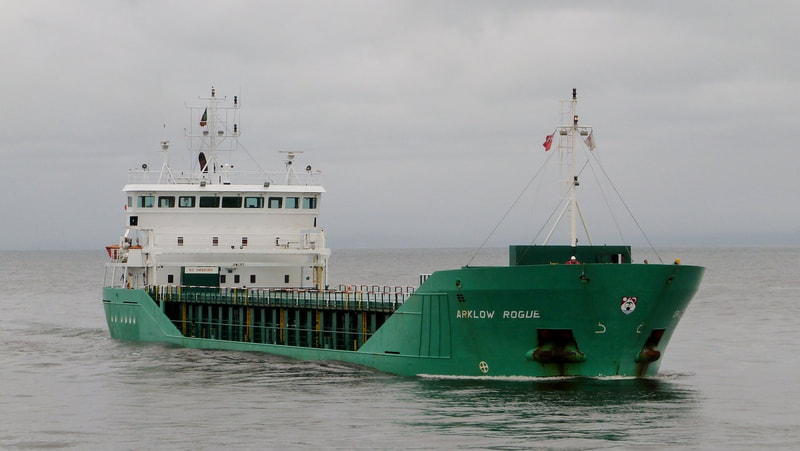 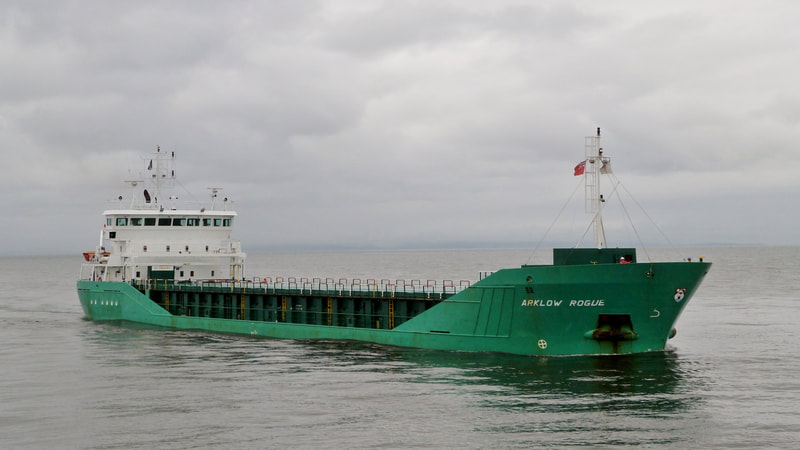 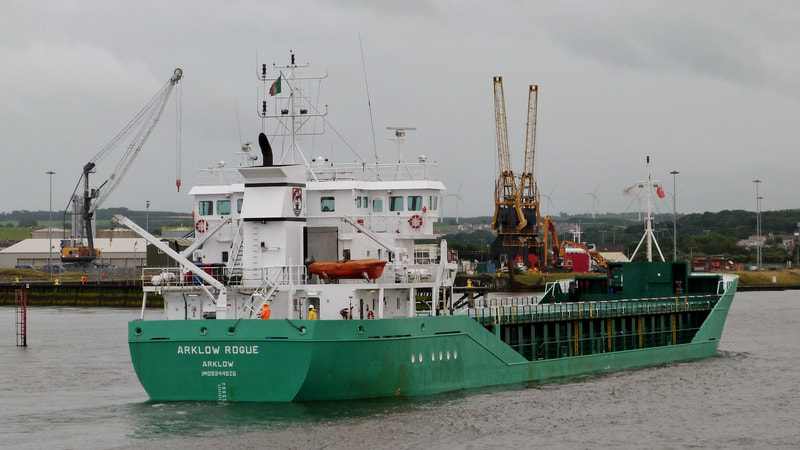 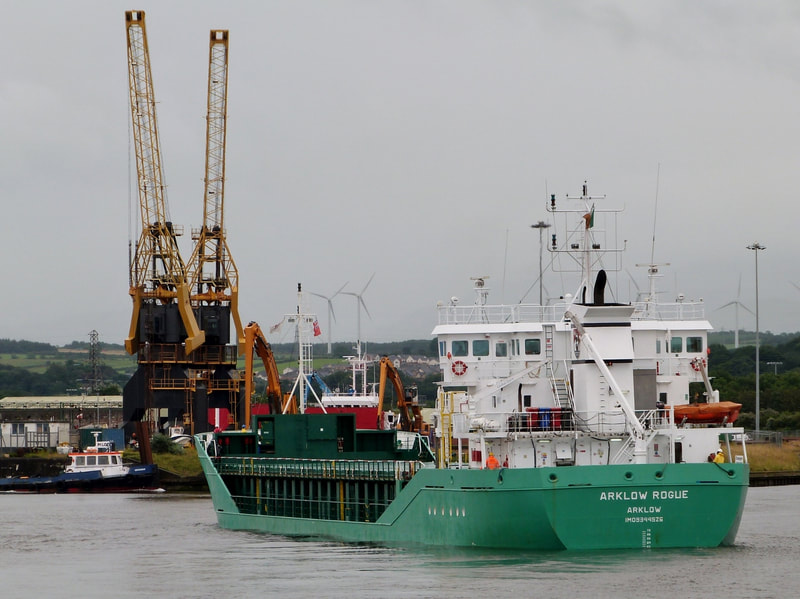 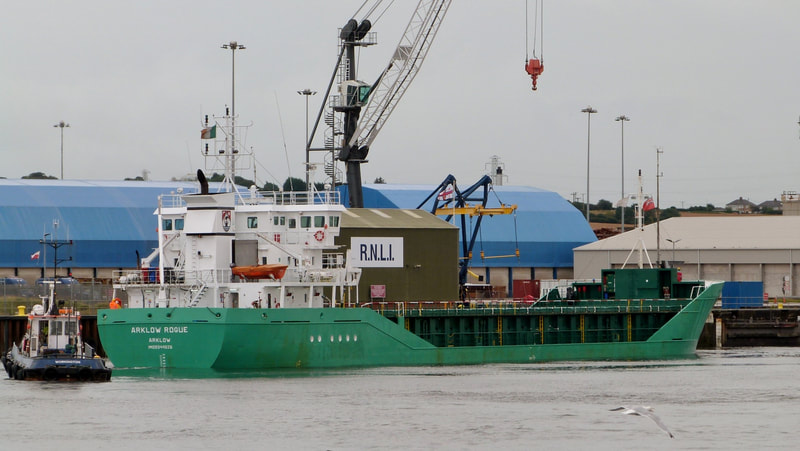 Seen making her approach on arrival from Vlissingen. 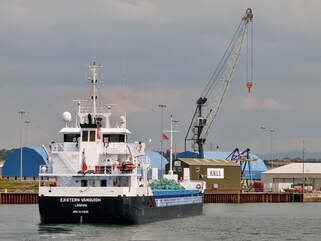 ​The 'Eastern Shipping' vessel is on charter to 'Scotline' to transport timber products.  The cargo is baled wood pulp for the local paperboard mill.

​She is 1 of 2 identical 'Eastern' ships used by 'Scotline', both of which are regular visitors to Workington,  VANQUISH was built in the Netherlands in 2012 at 89m & 3,600ton DWT as BIJLBERG .

The ship was photographed in calm conditions passing the south pier towards the harbour basin where she was turned before reversing into the dock. 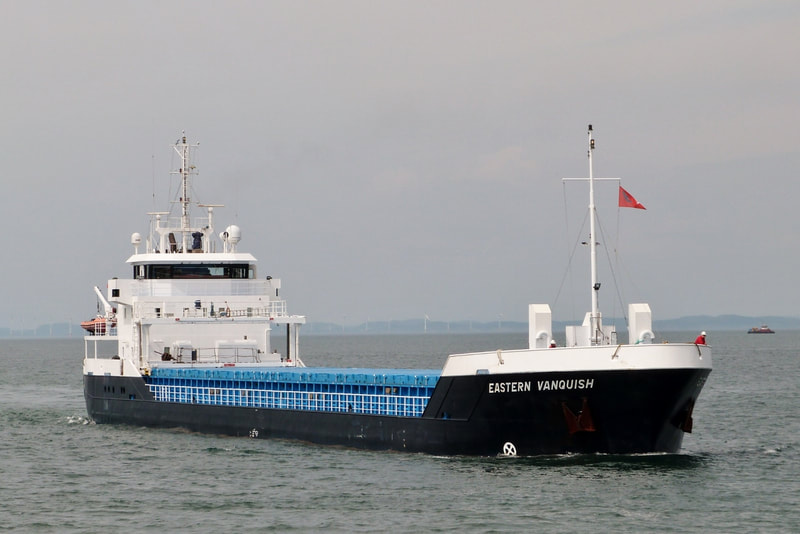 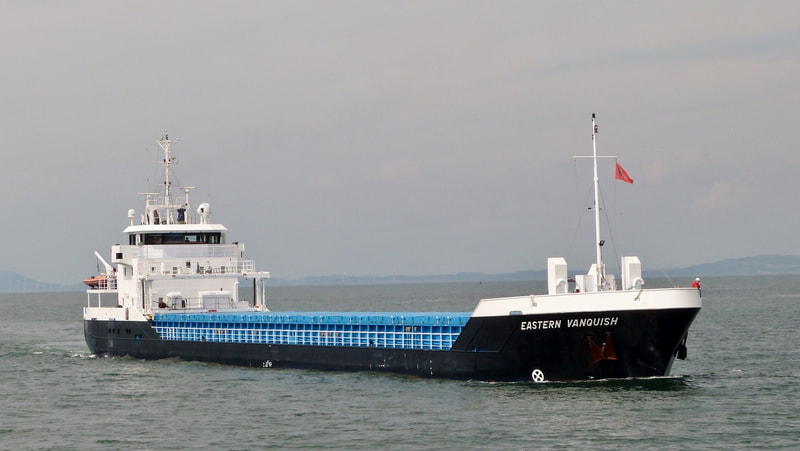 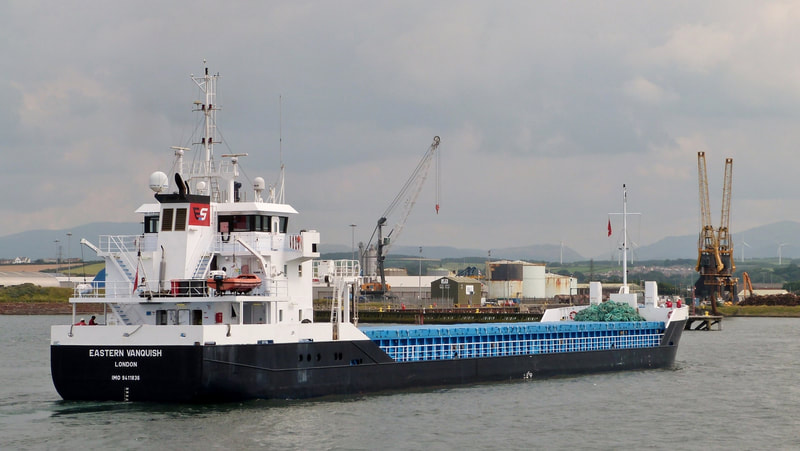 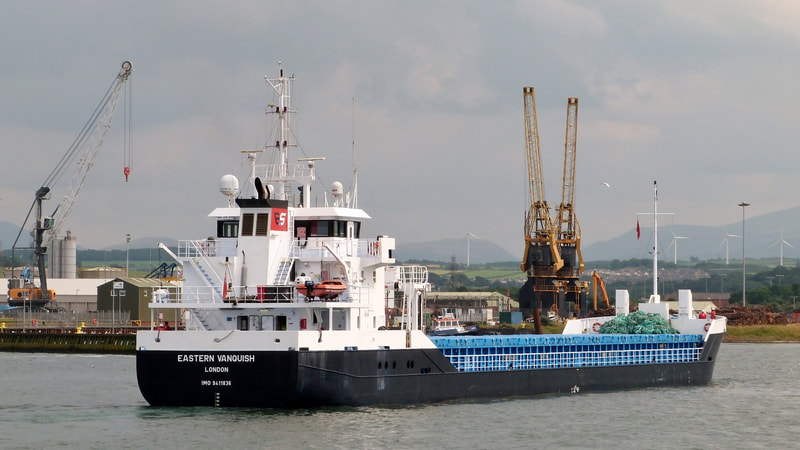 Two dramatic night photos by Ian Cormack capture the arrivals.
LADY ARIANE reverses into the dock on arrival from Salacgrivia, Latvia with round timber.  She is on time charter to 'Scotline' and has been a regular visitor since 2017.
An hour later MOANA entered port from Aveiro, Portugal with baled wood pulp.  The Dutch registered & owned vessel is a new visitor.  Built in 2009 with a DWT of 4,500ton she flies the flag of 'AMASUS' ship management.

Waiting her turn to dock on arrival from Kyle of Lochalsh. 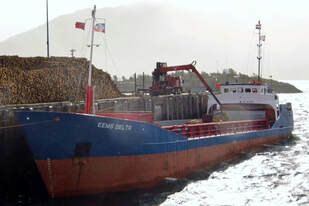 A busy morning at the port.  CEG COSMOS departed to make way for the arrival of EASTERN VIRAGE followed by EEMS DELTA.
It was the first visit of the 63m, 1,700ton DWT vessel which was built in 1992 as TORRENT.  She flies the flag of owners 'EXE Shipping' and funnel log of ship managers 'AMASUS'.
Over the past week DELTA has been working the Scottish ports of Wick, Scrabster & Corpach before picking up her cargo from Kyle destined for Workington.  She was photographed loading round timber at Kyle by Annie Branson..
Photographers from 'SolwayShipping' were on hand to record her arrival at Workington. 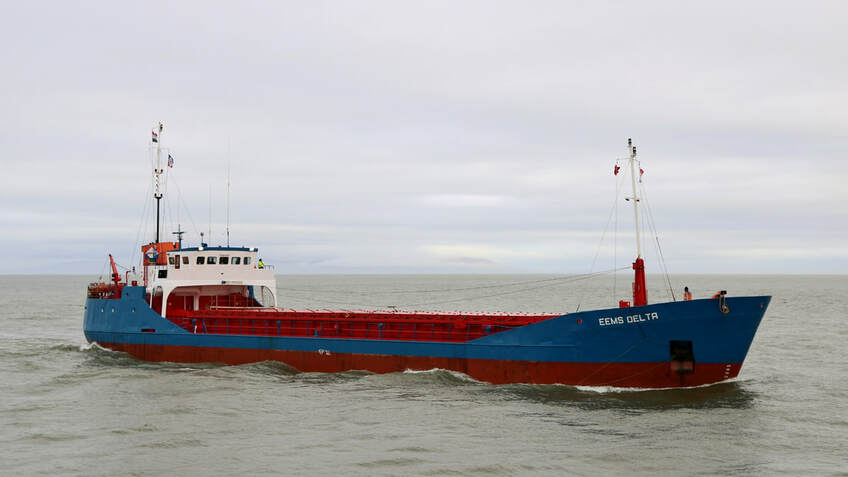